A coming of age story. A tale about grief. A polar odyssey. All of these statements describe in part what A Hundred Words For Snow is all about. However, they don’t tell the whole story and it would be an injustice to be so reductive.

Written by Tatty Hennessy and directed by Lucy Jane Atkinson, A Hundred Words For Snow focuses on ‘Rory’ (Gemma Barnett), a teenage girl who has a close relationship with her father. A geography teacher by vocation, Rory’s father has always been an explorer at heart. During her formative years, Rory was taken to outdoor excursions and subliminally acquired an appreciation of nature, just like her father. Some people are fascinated by desolate regions, untainted by the mark of Man. For Rory’s father, his fascination with the Arctic is linked with ‘proper’ explorers like Ernest Shackleton and the fact that climate change threatens its long-term existence. Alas, the life of Rory’s father is cut short by a tragic accident, but to ensure that his bucket list is fulfilled, she decides to take his ashes to as close to the North Pole as she can… 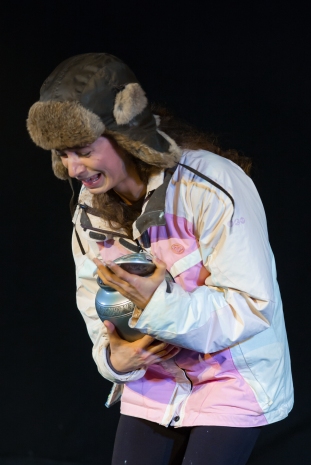 While this backstory is important, the play is very much Rory’s tale. What struck me from the word go is how candid Rory is about everything – how she’s feeling, what she’s thinking, the minutiae. So much so, that no matter how unusual Rory’s circumstances are, they are always believable and rings true.

Before this, Barnett vivdly conveys the range of emotions one goes through at a cremation and the wake, the turbulent emotions brimming beneath the surface. How her emotions felt on these occasions and the emptiness the day after lends credence to her future actions.

As in all the best tales, what’s most important isn’t the destination, but the journey itself and in this play Rory finds out for herself how much she truly is her father’s daughter. Of course, Rory’s relationship with her mother is also explored, though it’s fair to say that her experiences sow the seeds for some changes by the play’s end.

Historically, women’s presence in polar expeditions have been frowned upon, even up to 30 years ago, so Rory’s solo endeavour is memarkable and indirectly put into context in the play.

However, the heart of A Hundred Words isn’t Rory’s father’s wishes or the history of polar exploration, but her transition into womanhood in every sense. Someone who is self-reliant, who is a person in her own right and comfortable with the opposite sex.

Barnett deftly taps into the dark humour of the monologue, able to talk without sentiment about the most heartfelt things, but still able to crack a smile or observe the surrealness of situations.

If there’s any justice, A Hundred Words For Snow will be running again very soon and naturally it’s a shoo-in for Edinburgh.

A Hundred Words For Snow ran at the Vault Festival from 7th-11th March.