The possibility of artificial intelligence or ‘robots’ becoming potential ‘partners’ for human beings has been gaining traction in the Arts. Books and films have explored this theme for years, but plays – which haven’t traditionally been the home of choice for ‘science fiction’ – have been warming to the idea recently. In Version 2.0 – which is written by Kashyap Raja and directed by Kevin Michael Reed – this notion has been merged with a meta-narrative about a playwright and a former relationship.

Having known each other since they were 16, Kash (Tim Atkinson) and Karen (Tracey Pickup) have spent most of their time together performing his plays. However, a ‘development’ has lead to her moving on, leaving Kash bitter and seeking closure. To do this, he has employed a ‘facsimile’ of Karen to perform a play about the events that lead up to their ‘break up’. However, ‘Karen 2.0’ has misgivings about this and has to be convinced at regular intervals that Kash should have ‘access’ to her… 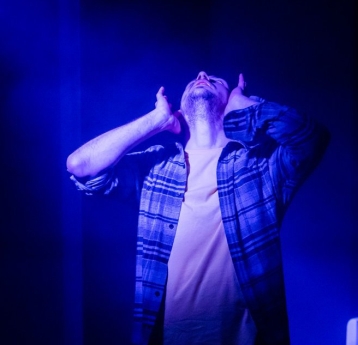 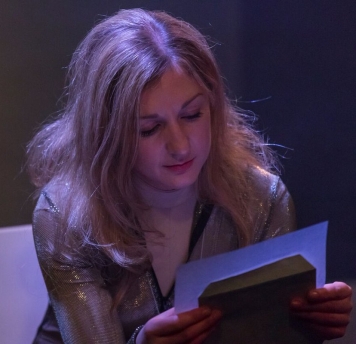 One of the issues of contention in the play is Kash’s perspective versus that of both ‘Karens’. Interestingly, both Karens challenge the assumption they are ‘his’ versus ‘people in their own right’. Why Kash has ‘robot Karen’ in the first place isn’t an ‘organic’ development (no pun intended), but what it does allow the play to do is show ‘history repeating itself’ so that the audience can judge for itself why certain events took place. So what is it about Kash that the Karens take exception to..?

Pickup’s performance acts as the conduit for the audience, naturally eliciting our sympathies and through her have a sounding board for Kash’s actions. Atkinson in some ways has the hardest role, as even though he’s open to Karen and the audience about his thinking, Kash has an unscrutable quality that is unrecognisable to himself. That’s why he needs to show his life on stage – to have emperical validation of his life. The question is, do we trust his ‘memory’ of Karen?

Version 2.0 is a thematically dense play, that takes an unusual route to working out one’s emotional baggage in public. The matter of Kash the playwright versus Kash the character in the play also raises further questions about the author’s intentions overall. Beyond the meta-synchronicity, naming a character after oneself lends itself to the assumption that the author wants to draw comparisons between ‘fact’ and ‘fiction, and the emotional ‘truth’ that lies between.