From the off, Conquest is unequivocal. A opening ‘conversation’ between Jo (Colette Eaton) and Alice (Lucy Walker-Evans) sets up eloquently the “no means no” paradigm between the sexes. From the female persective, answering in the negative is pretty clear cut, but for some persistent men, it is a ‘negotiation’, used to wear down resistance.

Following Alice’s own account of being ‘compromised’, Jo invites her to join a proactive feminist group with a new project in mind: Conquest. A cupcake service that has a secret ‘ingredient’, the ‘cakes’ themselves are to be delivered to perpetrators of ‘invasiveness’, with Alice’s ex to be a test subject. However, things don’t quite go according to plan, with Jo having to help Alice out in a fix…

As well as playing Alice and Jo, the actors perform all the other characters in the narrative. One of the most interesting of these is Jo’s mother, who was an active part of the second wave of feminism. As a fourth wave feminist, Jo’s very much concerned with opposition to sexual harassment and violence against women. However, as women who both live by their convictions, they sometimes ‘butt heads’. 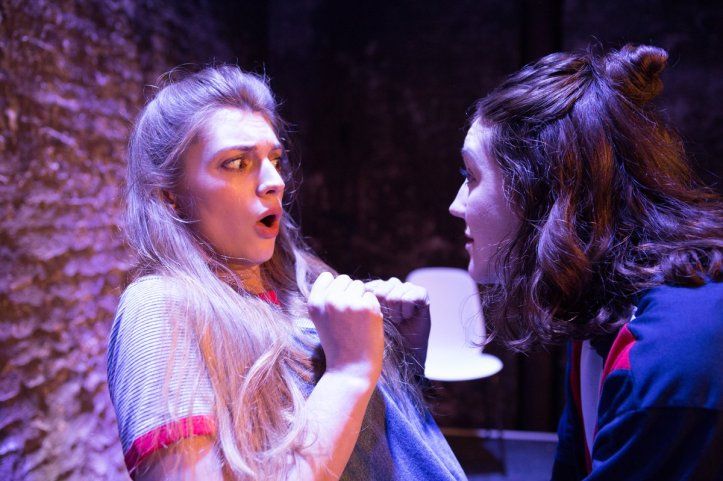 The disparity between Jo and Alice is also explored, with Jo acknowledging at the beginning of the show that one may find the characters irritating because a) they may behave differently to your social circle or b) their temperaments may be EXACTLY like people you know. In any case, Jo as the lifelong, committed feminist who inserts “patriarchy” into everyday conversation, is very different from Alice who often cries in public and often at the receiving end of being a ‘victim’. It is this notion of ‘agency’ – having the power to change how one is treated by men – that is as the centre of Conquest. And while the impetus to shake things up in the play begins at a personal level, it later sets its sights, like the suffragettes of yore, at the Establishment.

Conquest runs at the Vault Festival until 25th February.