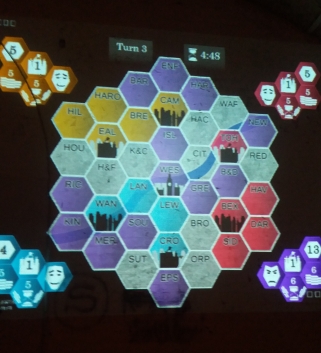 Over the past eight years, the British public’s dissatisfaction with the government (especially in London) has been growing at an exponential rate, with protest marches being a regular feature in the capital. Exit Productions have hit upon a novel way for Londoners to speculate and experience what it would be like to run a coup d’etat and take power from the struggling status quo.

Once taken to Unit 9, the audience one by one is asked whether they see themselves as ‘strong’, ‘free’ or ‘principled’. Depending on what one has said, the audience is directed to a different part of the building where ‘others of a similar dispostion’ are gathered. Once this has finished, everyone is congregated near a big screen and told in general terms what’s about to take place.

Each of the three groups represents a faction with a specific ideology and the goal is control the resouces and seats of power across the city. The electronic map of London that is referred to is hexagonal in nature and as the purpose of the ‘game’ is to acquire and secure the boroughs across the board, in some respect it is reminiscient of the Blockbusters TV show. While the decisions to allocate resources to defend positions is very much like a game, the participants are expected to interact wth members of the other groups, which is an exercise in compromise with other factions (at least initially). Later on this is less easy to achieve, though that’s the point being made. 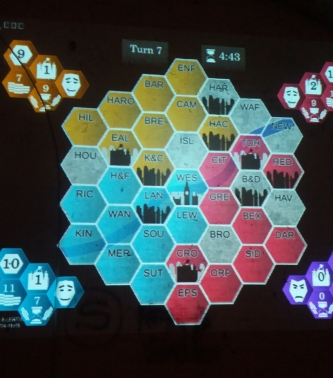 Tasks are regularly assigned (often three at a time) and there is always a tiny amount of time to achieve them. I think most of the ideas the organisers have for this interactive game are good, but I do think that it would have been better to have fewer rounds and more time for groups to actually chat about the tasks assigned. Because of the limitation of time, it’s easier just to along with the first idea anybody has to meet the deadlines. Also, if five minutes are allocated to do three tasks, one doesn’t want to spend half that time hearing again and again how little time’s available. A one minute warning should suffice.

Where this interactive game succeeds is making one think about the implications of enforcing ideology versus pragmatism. Even within one’s own ‘party’, it’s not always possible to agree on everything. However, alliances with ‘facilitators’ in other groups can be made, and the surest way to get the maximum amount of enjoyment out of this experience is to speak up and be proactive.

Revolution runs at Unit 9 of the Vault Festival until 18th March.