During October 2017, much of the the UK’s sky was engulfed in desert sand carried from the Sahara, creating an eerie, otherworldly atmosphere. This unexpected event provided the inspiration for The Dot Collective’s Desert Dust at the Star of Bethlehem. Set up to provide theatre for those who don’t have access to the Arts – especially for those with dementia, the elderly and those with disabilities – the Dot Collective’s latest production has a genuine universal appeal.

Tina and Andy live with their mother who is the landlady of a pub. Tina – the older of the two – wishes to be an adventurer, much like the protagonist in Pixar’s Up – and travel to far away lands. Andy, in contrast, still carries around ‘Mr Rabbit’, but dislikes being thought of as a ‘baby’. But while his sister is pre-occupied with her ‘adventures’, Andy is naturally drawn to Mr Shepherd, their neighbour, whose solitude is self-imposed – a response to having an “overabundance of love” and leaving it in all the “wrong places”… Meanwhile, while seeking seeking temporary shelter, Yuself and his pregnant wife Mariya find themselves holed up in the pub’s cellar, but it’s only a matter of time until they are found out… 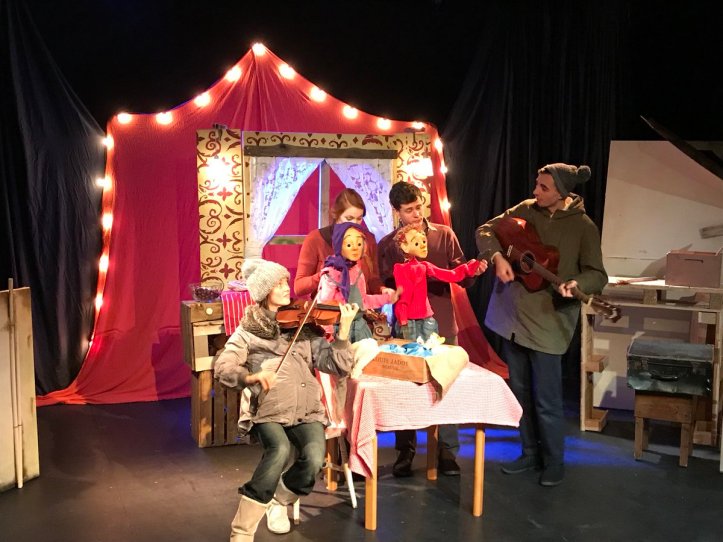 Tina and Andy are performed using puppets designed by Ana Maio. Ariel Harrison and Chris Levens who operate them lends them their voices and their ‘soul’, to the point one forgets in the moment that one is not watching a ‘real person’. As for the other characters in the show, they are played by Sonya Cullingford and Toby Lee, whose mercurial talents keep them in good stead in this production.

As is the case with other Dot Collective productions, Alexander Moschos pens the script while ‘newcomer’ Dan Ayling takes over directing duties.

Obviously the Yusef/Mariya storyline is an allusion to the Nativity, but it could easily be applicable to the many that find themselves homeless at this time of year or refugees without any support network. Not that the play is heavy-handed with allusions. As the play is seen through the eyes of the children, their perspective and sense of wonder is pervasive, unjaded and open to seeing the best in everything.

Although, Cullingford and Lee are interesting in all the roles they play, they bring a sense of mischievious fun to Nan and Margery, which all the adults will appreciate.

As an ensemble cast, each of the actor-musicians bring something special to the mix; bringing sensitivity and deftness to the darker themes of the show, while also bringing a requisite charm and ‘magic’ to the proceedings.