In Britain, December is often refered to as ‘panto season’, as many venues adjust their programming to attract the patrons who make their one and only annual visit to the theatre. Of course not everyone is into pantomimes, but there are shows out there that channel the magic of theatre and ‘the Festive Season’ while also acknowledging the grittier side of life. Peter Pan has been long been a Yuletide favourite, but ever since its inception, the original production with its emphasis on the Darling family and ‘flying’ has dominated the show’s focus. Until now.

Taking its cue from J.M. Barrie’s original books, The Lost Boy Peter Pan – which has been adapted and directed by Alexandra Spencer-Jones – traces the origin of ‘The Boy Who Wouldn’t Grow Up’ from his days as a child in Kensington and the events that lead him to leaving home. 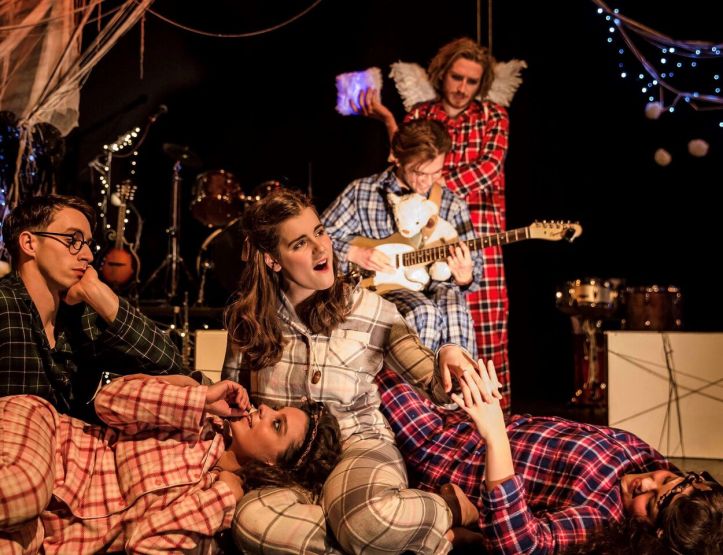 Performed by seven actor-musicians, The Lost Boy… wears many different influences on its sleeve. In some ways the tone of the show reminds me of the early productions of Godspell, using a story from a specific time and place, but adding a few contemporary references to ground it in the present (including music). While Mr Darling during the Edwardian era would be naturally taciturn and less emotionally demonstrative as a parent, the show’s 21st century counterpart is stressed about potentially losing an advertising account and having to go out in the evening to ‘schmooze’ a client. With work taking up one’s evenings as well as the day, the theme of the erosion of ‘fun’ in adulthood and the accompanying weight of responsibility is set up firmly at the start.

The song that are performed live in the show are all classics from the past 50 years, but arranged tastefully to suit the needs of the narrative. The variety of instruments used are impressive, ranging from the Classical (cello, violin, flute) to the contemporary (guitars, drums, keyboards). Taking inspiration from the show Our Ladies of Perpetual Succour, another ELO song makes an appearance – this time Livin’ Thing – and proving yet again Jeff Lynne’s songs are the perfect ‘feel-good’ accompaniment to any production. Other tunes include excerpts from The Beatles’ Tomorrow Never Knows and Barry Manilow’s Could It Be Magic. Many of the songs played prior and during the show build on the themes of magic. 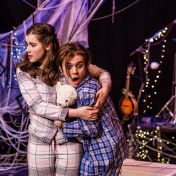 While the relationships of the Darlings and the Lost Boys follow the original sources closely, Spencer-Jones’ direction deftly draws out the disparity between Wendy and the less-emotionally mature boys. She accepts the role of ‘mother’ to her charges, but only because Peter sees himself as the ‘father figure’ and she assumes as they’re ‘mother’ and father’ to the group, Peter has feelings for her. Sadly for her, those aren’t the feelings he has, unwilling to admit to himself he still craves a mother. The show also yields more psychoanaytical insight into the character of Hook who is more of a rounded character than his pantomine counterpart. Ever so briefly, the show hints that like Mr Darling, Hook is an adult whose demeanour repels the company of children and in terms of willingness to settle down with the right person, Hook is the sort of person (age notwithstanding) who would meet Wendy’s emotional needs…

As a sidenote, while watching the ‘anarchic’ Lost Boys, it occured to me that Barrie’s tale must be the original inspiration for William Golding’s Lord of the Flies, a world without adults where children indulge in maiming and other extreme behaviour without perceiving the ramifications of their actions. But I digress.

In contrast to time-worn pantomines, The Lost Boy… is a refreshing alternative to festive fayre, pulling sharply into focus the bittersweet nature of growing-up and the choices one makes regarding maturity, responsibility and family.