Many famous male figures in the Arts are inextricable from the women in their lives and Pablo Picasso is the epitome of this. Known as much – if not more – for his affairs as his prolific output and as the ‘father’ of hitherto unknown painting syles, Picasso’s lifetime was spent under the spotlight of fame, a status he revelled in. It’s also a ‘truism’ that ‘great artists’ aren’t necessarily ‘great human beings’ – which based on Picasso’s relationships would be a major understatement. Picasso believed in his own hype, as much as the rest of the world, which perpetuated his never-ending pursuit of women. For some, his fame as a painter and a lover was like catnip to them, while for others his dogged pursuit of their affections wore them down until they acquiesced. But even then his eye would also be looking ahead the next conquest… 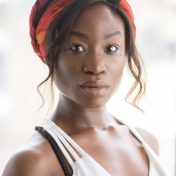 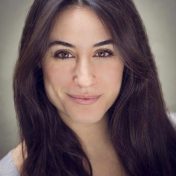 Marking the inaugural show at the Playground Theatre in west London, Picasso by Terry d’Alfonso takes place in the Afterlife, where the artist is met by three of the many women in his life. Directed by Michael Hunt, the play is staged in a circular area of sand – much like a ring for a bullfight – with Picasso (Peter Tate) stands in the centre, poised and bare-footed. Surrounding him are three veiled figures who reveal themselves to be Geneviève Laporte (Adele Oni), Marie-Thérèse Walter (Claire Bowman) and Jacqueline Roque (Alejandra Costa). Picasso speaks about his life and art from his perspective, while the other women interject and challenge him about their relationships… and with the other models/lovers. Be that as it may, Picasso is unfazed, defiant, without a flicker of doubt about the legitimacy of his actions.

The language and metaphors that Picasso in the play uses to describe his status and self-worth is comparable to Gore Vidal’s Caligula or Dysart’s description of the pagan rituals in Peter Shaffer’s Equus. Equating himself with the Greek myth of the minotaur, plus the Persian myth of Mithra and the bull, Picasso sees himself as a primal force of nature – above ‘petty’ notions of morality, but a slave to his art. While he professes a general love of women, love of some in particular and their essentialness to his work, their emotions seldom factor in his discourse or his treatment of them. 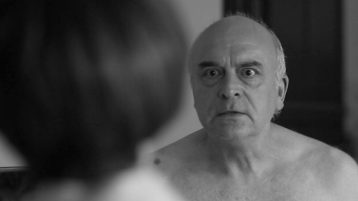 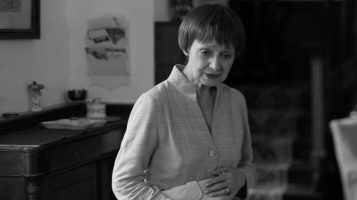 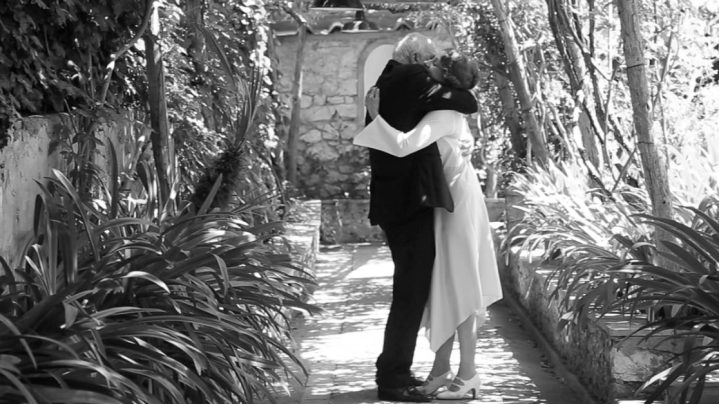 Images of Picasso’s past filmed for the play, featuring Peter Tate and Milena Vukotic

The play uses filmed footage to good effect to depict Picasso first marriage with Olga (Milena Vukotic) and Marie-Thérèse Walter (Margot Sikabonyi) in her later years. Projected on to a ‘canvas’ behind the actors, the story of Picasso’s life ‘paints’ are a much more truthful ‘picture’ about the strengths and weaknesses of the man.

Marie-Thérèse Walter onstage appears as young 17-year-old innocent, whose life was turned upside by the then-45-year-old artist. Much like her incarnation in life, Bowman portrays Walter as a stoic figure, though there’s no hiding the sorrow in her eyes. While she was initially ‘the other woman’, it was Picasso who sought her out and it’s revealed that when she was pregnant, her made her present herself to his wife to ‘break the news’. He also suggested she “fight it out” with Dora Maar, another one of his lovers, if they really expect him to choose between them. For Picasso, power over women was as much of an aphrodisiac as beauty, hence his quote: “There are only two types of women: goddesses and doormats.”

As another teenage who fell under the spell of Picasso, Laporte has the distinction of being the only other lover apart from Françoise Gilot to eventually leave him and remain relatively sound of mind. Unlike Walter, Laporte had no children by Picasso and had a formal education in the Arts. It is also inferred by some that Laporte wasn’t a ‘true’ lover of Picasso for not living with him, though that’s precisely why she found the strength to break free from him.

As Picasso’s second wife and his last significant relationship, Roque is portrayed as someone who felt she loved him the most – knowing all about the past, his ‘appetites’ and ‘needs’, but staying with him nevertheless. Much like the women in Powell and Pressburger’s Black Narcissus, each in their heart claim this figure of unapologetic masculinity as their own, but in truth no one did or does. The world would be a very different place if all the women in Picasso’s life stopped seeing each other as rivals and instead gave him a wide berth…

At the play’s close, one is acutely aware that if the measure of one’s life is how positively one is remembered, then Picasso the man (in contrast to ‘the artistic legend’) was a failure. True enough, he ignited the passions of all who fell under his sway, but not one wife or lover lived ‘happily ever after’ – with two meeting very tragic fates.

The play in some ways makes for uncomfortable viewing, but that’s a natural consequence of Hunt not letting the myth of the man overshadow his emotional legacy. Fidelity aside, regardless of his age, Picasso’s predilection for women in their 20s or younger doesn’t sit too well with today’s sensibilites and one wonders whether someone such as him (Hugh Hefner aside) could be tolerated now. Probably not.

Picasso runs at the Playground Theate until 25th November.