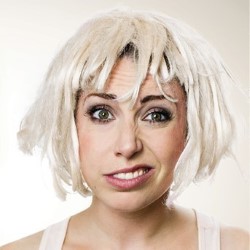 The brainchild of comedienne Holly Morgan, Seven Crazy Bitches freely adapts Shakespeare’s ‘Seven Ages Of Man’ from As You Like It and applies it to women (or rather ‘divas’). Part cabaret, part stand-up routine, Seven is actually an intimate show that doesn’t put ‘glitz-and-glamour’ above building a rapport with the audience. As for the unusual name for the show, Morgan admits it helps to stand out among all the other shows in Edinburgh. There is, however, a degree of ‘reclamation’ of the word, in the same ways that Ashley Judd reclaimed “Nasty Woman” from Donald Trump or the ‘C’-word in The Vagina Monologues.

In terms of the ‘divas’ referenced, they range from obvious ones like Liza Minnelli and Cher to some unexpected choices. The examples that really resonate with Morgan, such as Stevie Nicks are self-evident and it’s in these moments that the occasional serious points in the show stand out.

Part of the show’s charm is that it acknowledges from-the-off that it is created on a budget with inexpensive wigs etc. Tom Moores who accompanies Morgan on stage as musician-cum-‘Shakespeare’/the Patriarchy supplies much of the dry wit and a complementary counterpoint to Morgan.

The strongest aspects of the show are where the emphasis is placed on anecdotes and the pair’s onstage personas. Certainly Morgan is an accomplished singer and an adept impressionist. However, where the show really comes alive is the interaction between herself and the audience. While there is a degree of audience participation and ‘disclosure’, the amusing anecdotes about her own life and what women in general put up with all add to the congenial atmosphere.

To my knowledge this is the first time that Morgan has performed in a ‘solo’ show in Edinburgh, but on the strength of this show which she also wrote, it’s the first of many.