It goes without saying that being a qualified fitness instructor carries with it a certain prestige and respect as a ‘health professional’, but who decides that’s what they want to do as their chosen vocation? Katie Kopajtic is an actress, who like many people in the industry, has a supplemental ‘back-up’ job to pay the bills. In her case, it’s actually working as personal trainer for a gym that’s based beneath the Trump Tower in New York. Taking the saying about ‘write about what you know’ to heart, Kopajtic (or Katie K as she’s known within her gym) has devised a show based on her experiences. 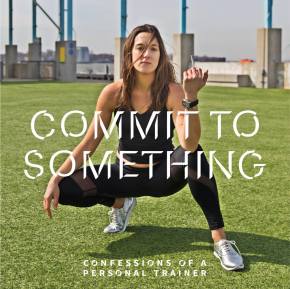 Any job that requires interaction with the public is bound to attract ‘characters’ and gyms are no exception. As an establishment that is based under prime NY real estate, a certain ‘class of clientele’ visits the gym. That’s not to say that they are any more au fait about keeping fit. They just, perhaps, have more ‘disposable income’ for one-on-one instruction.

Kopajtic goes into some detail about these colourful characters and what they hope to achieve by coming to the gym versus actually putting in the hard work to reach their desired physique or level of fitness. In one instance, she recalls talking to a man pushing 60, who has spent most of his adult life taking part in ultramarthons. Surprise, surprise, his body can’t do what it used to do 30+ years ago, but he wants to still proves he has the prowess of a young man!

Kopajtic is quite open about how she ‘fell’ into the world of fitness, as opposed to it being some part of a career plan. Using what skills and training she already had to work on the gym floor, she’s encouraged by the powers-that-be to go the extra mile and offer an individualised service as she would be paid more (which would indirectly go to her superiors too).

Of course, with spending so long of one’s life with clients, the line over time becomes blurred with regards to relationships. Again, Kopajtic is very candid about this – the ‘favourites’ that naturally occur over time, those with whom she shares ‘chemistry’ and flirting occurs, and in one particular sad anecdote, a ‘friendship’ where taking a keener interest may have helped the person’s mental well-being in the long run.

As this show discloses, there’s a certain amount of ambivalence that comes with the territory, what with having to surrender one’s early mornings, evenings and weekends to the job in hand. But as Kopajtic admits, the relationships that develop in this environment are unique and are the result of privileged access to people’s lives. In the process, she’s found she’s unexpectedly gained as much as she’s given.