First performed in London in 1997, Enda Walsh’s coming-of-age drama Disco Pigs has been captivating audience for the past two decades. The 20th anniversary production, which is directed by John Haidar, is simultaneously a timeless take on one’s teenage years and an ode to the 1990s.

Cork, 1979: Sinéad and Darren are born in the same hospital, at approximately the same time. Adopting porcine monikers during their childhood. ‘Runt’/Sinéad (Evanna Lynch) and ‘Pig’/Darren (Colin Campbell) maintain their intense, solopsistic relationship throughout their childhood and adolescence. With nowhere to go, nothing to do and no other friends to speak of, Pig and Runt are each other’s world. But the cusp of adulthood brings a fresh perspective, each wanting something the other doesn’t want. 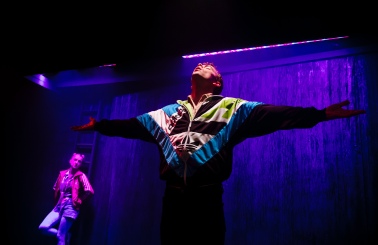 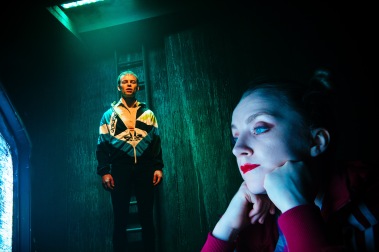 While Disco Pigs is ostensibly a two-hander play, in terms of the movement and verbal stamina required by the actors, it is a full-on from beginning to end as the 1990s unravel before our eyes. Underage drinking is a particular favourite pastime, and barring no harm to each other, they think little about the ­­­­­repercussions of their actions. The lack of empathy for other people outside their ‘unit’ is particularly noticeable with ‘Pig’.

As the more overt of the pair, Campbell’s Pig is a veritable whirlwind of activity, his feet trying to catch up with the speed of his vocal delivery and vice versa. Initially confident and assured with Runt as his bedrock, the realisation that he has deep feelings for her – and that she’s drawing the attention of the male gaze ­­– leaves him less sure-footed.

Lynch’s Runt, while no wallflower, delivers a ‘quieter’ performance, as we see the breadcrumb trail of her yearning for independence show. Between having to deal with an altercation at a karaoke evening by herself and the trip to the coast that literally moves her horizons, she feels the universe telling her that change will come, has to come…

When they’re not drinking or indulging in petty crime, Pig and Runt like nothing better than to go dancing and it is in the clubbing scenes where the play really comes alive, and lighting designer Elliot Griggs and sound designer Giles Thomas come into their own. For anybody who remembered the 1990s music scene clearly, Disco Pigs is a blast from the past – a real nostalgia-fest.

So asides from the music itself, how does the play stand up 20 years later? Often when ‘youth culture’ is depicted in any medium, it is already out of date with taste and vernacular having already moved on since the play’s inception. Pig and Runt’s bespoke way of talking about things is Burgessian in its conceit, a shorthand for their cerebral intimacy as ‘twins’. As for the term ‘Disco’ in the title, that’s obviously an anachronism from the 1970s. Asides from the love of dancing, it does subliminally suggest a place or people firmly rooted in the past, whose circumstances precludes the possibility of embracing change…