Ever see young children look at things with sense of wonder and enjoyment, and they in turn remind you that ‘yes, that’s cool’? Well, I’m not equating the young actors who took part in Generation Arts’ The Happy Theory with ‘children’, but their unjaded enthusiasm for acting per se reminded me of finding the love of performing for the first time and how infectious it is. For the uninitiated, Generation Arts allows young people who are the margins of society to participate and train in a free, year-long accredited acting course. At the end of it, there’s very real chance that successful graduates will be accepted into one of the main, established drama schools. Even for those who don’t go on to do this, they will have acquired the confidence and social skill sets to progress into higher education and the world of work. 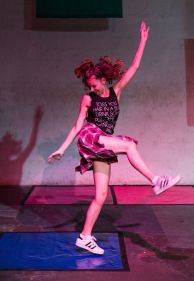 This year Generation Arts’ end of year show is The Happy Theory. Devised by the young actors and directed by Ali Godfrey, it uses a question that’s put to a class about contentment as a jumping-off point and we see how this works in out practice for students and faculty staff alike.

Many of the scenarios follow the concerns and experiences that young people face such as choosing to go to college (or not), time spent on social media and gaming, popularity, stressing about exams and caring for a terminally ill parent.

Singling out people in the 15-strong cast seems a tad unfair, but I confess I had fondess for the vivacious characters who were able to inject a cheeky cockiness and veracity into the teachers and authority figures!

On the strength of this show, I can honestly say that the graduates from the class of ’17 wouldn’t be ‘charity cases’ at the top drama schools. They would have thoroughly earned their places.

The Happy Theory runs at the Yard Theatre until 24th June 2017.