While suicide may be commonplace in classic literature, as a subject in its own right that’s taken seriously and with respect, there is much ground to cover – especially in plays. One might think that focusing purely on women’s relation to suicide might streamline the subject, but if anything it raises further questions. It has long been known that suicides often occur in the same family, the first person to do in effect ‘gives permisson’ for other family members to also do so. This is perfectly illustrated in the fate of the five Lisbon girls in Jeffrey Eugenides’ The Virgin Suicides (which was faithfully made into a film by Sofia Coppola). Of course there are many notable example of women inthe Arts who have taken their own life: Virgina Woolf, Sylvia Plath, Sarah Kane, Diane Arbus, L’Wren Scott… And with a macabre twist of fate, Assia Wevill – Ted Hughes’ partner at the time of Sylvia Plath’s death – took her own life in the same fashion as Plath, along with her daughter who Hughes never accepted as his own… 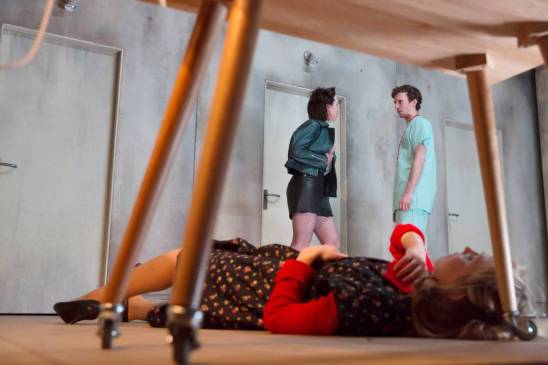 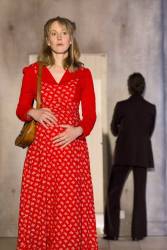 Directed by Katie Mitchell, Anatomy traces the impulse to commit suicide within three generations of women in one family. Rather than the narrative be told in three distinct time periods, past, present and future are told simultaneously with all three women on stage. We first meet Hattie Morahan who plays Carol in the early 1970s, Kate O’Flynn as Anna on the cusp of the 21st century and Adelle Leonce as Bonnie in the 2030s. The action on stage can be compared to a piece of music with the same dialogue repeated, but spoken in a different context and to a different beat. This emphasises the echoes of experience across the generations and their permutations.

While not identical by any means, Anatomy does show traces of being influenced by Sarah Kane’s 4.48 Psychosis in terms of its form and showing characteristics of depression across one or more people. For Anatomy’s family, it’s not death that’s hard to face, it’s living. More traumatic though for the women is the violent way their mothers have met untimely deaths by their own hands. In the nurture versus nature debate, this abrupt, delberate decision by the mothers can be the deciding nudge for those who already have a proclivity for depression – the taboo of suicide having already been broken. It’s telling that with Carol and Anna, the prospect of motherhood only temporarily assauges the will ‘to depart’. The urge is ever-present, but there is at least an innate understanding that it’s unfair to a child so early in their lives.

In the case of Anna, drugs are a double-edged sword – blotting out painful memories, but the overuse of them would eventually lead to life-threatening injuries or an overdose. Conversely, after being weaned off such substances, there’s no refuge from one’s dark thoughts, nothing to help stay ‘on an even keel’. Bonnie has a different coping strategy – working within medicine. If there’s a way to beat the psychological forces that have plagued her mother and grandmother, it’s here. However, being in the latest chain of ‘cause and effect’, is Bonnie willing to also have children and conceivably pass on the proclivity for depression in her genes? Who’s to say that in the future, she won’t do the same thing? What’s the most responsible thing she can do while she’s compos mentis?

While Anatomy may not definitively answer what drives some women to suicide, it does take great pains to show how those with depression wrestle with their demons daily and its toll on the loved ones in their lives. For the time being, Anatomy sets the bar for other plays on this subject.

Anatomy Of A Suicide runs at the Royal Court Theatre until 8th July 2017.