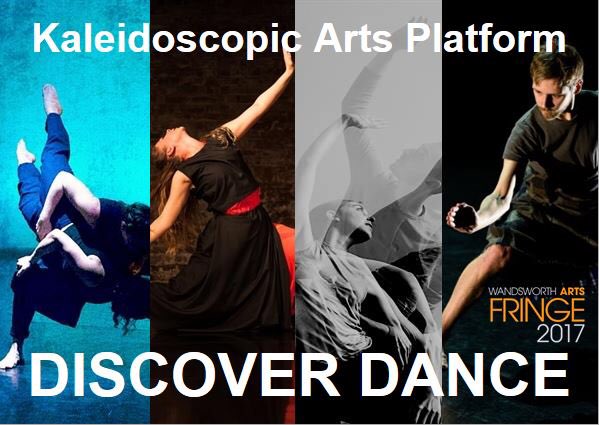 In keeping with the ethos of taking dance to places or public spaces that normally don’t showcase such activities, Kaleidoscopic Arts’ Lucia Schweigert & Konstantina Skalionta have brought the 4th Kaleidoscope Arts Platform to Wilditch Community Centre in Battersea.  The evening embraced  a wide selection of disciplines – some rooted in centuries-old ideas – but all brimming with ideas and artistic intention.

The first performance of the evening (Pibroch Tales) was inspired by the 17th century bagpipe music of ‘high culture’. With choreography by Jayne Port and dancing by Gordon Douglas Raeburn, the musical extracts to untutored ears sounded avant-garde in terms of their stripped down nature, especially on the occasions  when they were reproduced vocally. In any case, each short excerpt performed highlighted a different facet of three stories from The Kilberry Book of Coel Mor.

The second performance of the evening, double pendulum, was choreographed by Helen Cox. Performed by Cox and Andrew Oliver, the physical motion and mechanics of such an object was analysed and used as a jumping off point for anthropomorphic movement. Akin to the movement of planetary bodies, the circular movements of limbs mirrored the movement of feet. Sometimes exactly in tandem, sometimes holding to one’s own rhythm, each person exerted their gravity, propelling or pulling the other to one’s self.  https://vimeo.com/201555094

After the first interval, Lucia Schweigert showcased a piece she choreographed entitled Living With Sin. Performed Katy Richardson, the dance was meant to be a kinetic representation of the Biblical Eve and the ‘legacy’ that has befallen all women all some under the male hegemony. Initially dressed in ‘virginal’ white, the fecund, experienced Eve dresses in red, before dressing in black in her twilight years. Asides from being truncated version of the stages of life, the transitional clothing of white, red and black is certainly applicable to the literary character Lady Macbeth. However, for my money, I thought the most obvious links to this dance were the women in the plays of Federico García Lorca – especially Blood Wedding and The House of Bernarda Alba.

The final piece of the evening (The Way They Were Then) was performed by the four-strong all-female troupe Feet Off The Ground. Inspired by Mujeres – a collection of short stores about women by Uruguayan journalist Eduardo Galeano, three separate ‘episodes’ were performed and choreographed by Lucia Chocarro, Robyn Holder, Sophie Thorpe and Patricia Zafra. To one side of the room, Chocarro was sitting quietly making origami sculptures, while at the other, the antithesis of this stillness was taking place – with Zafra and Thorpe routinely catching Holder who leapt into their arms, before she breaking away again and running towards the audience. The troupe made use the whole performance space and certainly ‘let rip’. This was the most dynamic piece of the evening, especially with the live score performed on a number of instruments by Alex Baton, taking the ambience to another level. 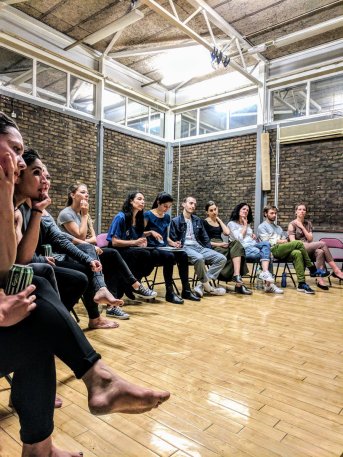 After the second interval, a Q&A session took place. Unlike other Q&A sessions I’ve been to in the past, this one had the panel (made up of the choreographers and dancers who took part) asking the audience lots of questions about their response to their work (were they able to ascertain what was going on, etc). I suppose in one sense it’s no different to answering questionnaires, but talking to someone face-to-face is much more engaging than having to write a response. I think it’s fair to say that it was very enlightening for all concerned.

As well as the dance performances themselves, patrons were able to take to peruse Elisabeth Schilling’s STADTKÖRPER photo exhibition at the back of the hall, which depicted elements of dance in relation to unusual aspects of Berlin – further cementing the century-old relationship of photography with one of oldest of the Arts.