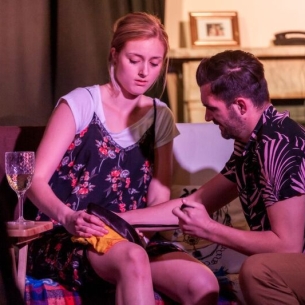 Written by American playwright David Moberg and directed by Annie Tanton, Teaching A Dillo To Cross The Road looks at the acerbic relationship of May and Will Bentar (Rebecca Calienda, Daniel Chrisostomou). Influenced by the black humour and dynamics of Tracy Letts’ plays, (especially August: Osage County) the marital difficulties they face are exacerbated by May’s outlook of Will’s ‘nearest and dearest’.

On the surface Will is the more placid of the two, but then he’s out at work most of the day. Unable to hold on to a job, May stays at home with Flo (Olivia Foan) the homecare help for Will’s father Sam who suffers from dementia. Sam, however, is also prone to incontinence and biting, leaving Flo hurt and May exasperated… Sam is never seen, but the noises he makes offstage (voiced by Richard Worland) are unnerving, suggesting something ‘subhuman’ in torment, not unlike the cries from the gimp in Pulp Fiction.

Much like Johnna Monevata – the housekeeper in August: Osage County – Flo is the silent witness to much of the mayhem in the house while she mourns the death of her father. While she she doesn’t come across as particularly astute, Flo wins over Will and May with her endless patience and empathy.

May is very much cut of the same cloth as Violet in August, her mood swings and constant inebriation hinting at deeply hidden things, beyond the reach of solace. Similarly, Will’s easygoing nature mirrors Charlie Aiken in August, much to the annoyance of May, whose ‘bad’ behaviour increases exponentially to Will’s indifference to her.

While Will and May aren’t analogous to Martha and George in Who’s Afraid of Virginia Woolf?, the arguments at their most heated certainly give them a run for their money, as the exposure of secrets and anger are inextricably linked.

Dillo takes place on the eve of Chase Manning’s wedding (played by Callum Tempest) – Will’s incorrigible boss. Inviting himself over to the Bentars after his stag-do, Chase engages in some drunken horseplay with May, which Will is powerless to stop. However, Chase has eye on someone else later in the evening… Meanwhile, his fiancée Hope (Anna Chessher) – who also happens to be Will’s co-worker  – also pays a visit, coaxing Mr Bentar to acknowledge why they get on so well…

The combination of suppressed grief, stress from dementia in the family, alcoholism, secrets and scatalogical references makes Dillo a crucible of combustible elements, a smorgasbord of dramatic possibilities.

Tennessee Theatre Company who put on this production, have found in Dillo ‘a diamond in the rough’. Whilst unbeknownst at present to theatre patrons at large, the play is refreshingly candid and beyond its intial dark humour, asks pertinent questions about living with the consequences of the past and clarity in the present.

“If you think were just gonna ride off down the highway into the sunset, then you are dumber than a f***ing dillo…because I cant forget. Won’t forget. What he did. What you did.”

Teaching A Dillo To Cross The Road ran at the Bread & Roses Theare from 11th -15th April. It will run again at the Brockley Jack Studio Theatre 22nd-26th August 2017.