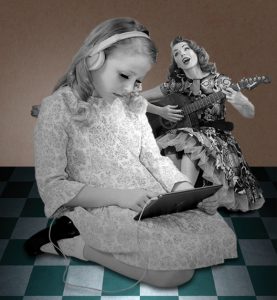 A labour of love from seasoned songwriter Tanya Holt, Cautionary Tales for Daughters – Songs Your Mother Never Taught You are a collection of sonss offering sage advice to her 11-year-old daughter Dotty. Accompanied by Birgitta ‘Fred’ Kenyon on keyboards, the duo perform the satirical collection of compositions in a relaxed, warm fashion.

The songs can be broadly divided into the ‘don’ts’ that people shouldn’t do themselves and the external ‘dangers’ in relationships and life in general. More of the latter took place in the second half of the evening and while the lighter stuff was fun to listen to, the ‘less comfortable’ subjects were more satisfying in the long run.

Subjects such as tattoos and ‘the grass is greener’ attitude to relationships gently open the evening, while one particular song about gender stereotyping is especially poignant and welcome.

Touching on the subjects of women’s relationship with food and the sort of men to avoid brings added grit to the proceedings, while even the generational notion of brands is wryly introduced, as age and taste versus consumerism are highlighted.

Underpining all these songs are illustrative pieces of animation and anecdotal tales – some are Holt’s own, while others are from friends or contributions from previous audiences. As such, the show is constantly evolving, so chances are Cautionary Tales will have significant differences for each performance.

Concluding with a Hugh Laurie-inspired song about ‘carpe diem’, Cautionary Tales delivers a broad selection of melodies that are distinctive and intelligently crafted.