Glaucoma and Taming of the Shrew, Cockpit Theatre – Review 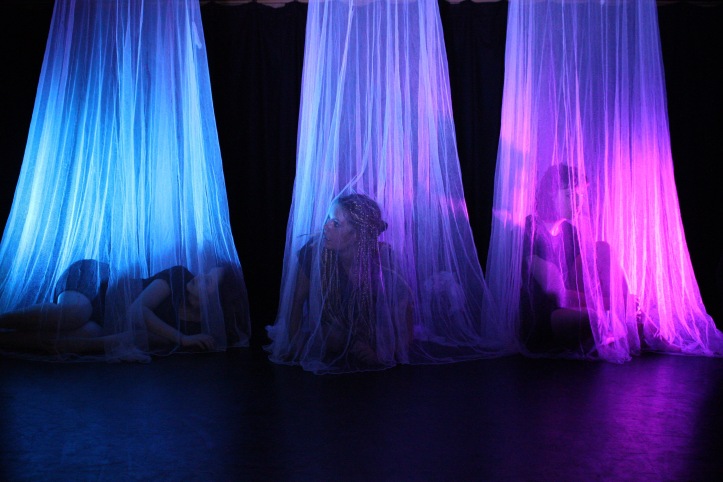 First performed last year, Glaucoma from theatre company CapaTaro has a prescience beyond its years. Incorporating physical theatre with satire and political will, Glaucoma doesn’t pull its punches when it comes to hinting at the predicament of today’s women and their responsibility.

Set in an Orwellian world where any dissenting voice is incarcerated, women are the first in the line of fire. Eleanor Hurrell, Ines Sampaio and Alice Wolff-Whitehouse play Elouisa, Carolina and Niamh respectively, while Beth Johnston plays the various authority figures who may or may not be on their side.

Having a dissenting voice in the play carries with it certain expectations, certain responsibilities, and the ‘moral dilemma’ regarding the women’s intake (or not) of sustenance certainly mirrors that faced by the Suffragette movement during their hunger strike phase. The women in this dystopia also have their hour of ‘biblical temptation’ when they’re offered their freedom in exchange for certain ‘soul-destroying’ concessions…

From an aesthetic point of view, there are aspects of the show are visually striking, such as when the lights shine from behind the women when they are ‘trapped’ in their diaphanous prisons. The fact that the fabric  – the ‘membrane’ – moves with them with them wherever they go is indicative of the closed mind that doesn’t see things as they really are – the symbolic glaucoma that stops people from acting and speaking out.

As for the sound design, the cries from the women at the beginning of the play echoes those made by the Belgian collective Ontroerend Goed in their show Siren: primal, feminine, eternal.

‘Modern’, ‘up-to-date’ versions of Shakespeare’s work are nothing new. Before Baz Luhmann’s famous Romeo + Juliet, the 1950s had West Side Story (Romeo & Juliet), Kiss Me Kate (Taming of the Shrew). Heck, even The Tempest was ‘reimagined’ as Forbidden Planet.

Continuing the theme of female-led physical theatre at the Cockpit Theatre, Get Over It Productions are also performing a version of Taming of the Shrew – set in 1989 during the House/Dance music era –  and replete with an all-female cast. Directed by Paula Benson, the play has jettisoned the more obvious associations with it being about the battle of the sexes. In its place now stands a play on about the community trying to psychologically assert its will on the individual.

Velenzia Spearpoint plays the spirited Katherina, while Sassy Clyde plays her would-be suitor Petruchio. Evocative of the Medierranean islands famed for their club culture, the music and dancing of the cast continues from beginning to end. While Spearpoint plays Katherina as ‘someone who dances to her own beat’, the urge and will of the others in the confined dancing space is keenly felt. As for the dancing itself, the general ‘swaying’ (as opposed to specific movements) at times reminded of some of Pina Baush’s choreography in Almodovar’s Talk About Her.

But is the music and dancing a natural fit with the storytelling and original concept? Nat KIng Cole probably summed it up best:
There may be trouble ahead
But while there’s music and moonlight and love and romance
Let’s face the music and dance.

Glaucoma and Taming of the Shrew run at the Cockpit Theatre, London until 27th January (7pm/9pm respectively).