Men From The Ministry… Reloaded 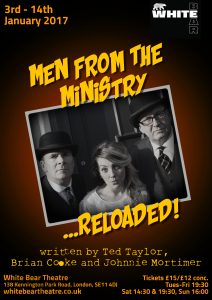 Ever since the inception of radio and television, comedy and political satire have been a constant presence in popular entertainment. Concurrent with the BBC radio programme Round The Horne – another perennial favourite on the airwaves in the 1960s – Men From The Ministry focused on the antics of civil servants Deryck Lennox-Brown (‘Number One’) and Richard Lamb (’Number Two’), whose antics pushed the boundaries of ineptitude with each episode.

In recent years, faux-retro shows like The Fitzrovia Radio Hour have tapped into an appetite for comedy evocative of the post-war era and last year there was a UK tour marking the 50th anniversary of Round The Horne. In light of this, the White Bear Theatre following its recent refurbishment, is currently hosting a fortnight run of classic episodes of Men From The Ministry.

Adapted for the stage by Brian Cooke and directed by Michael Kingsbury, these extended sketches are fascinating as they were one of the first examples of British comedy that dared to depict the Establishment as less than competent.

Joining Stephen Critchlow and Robin Sebastien in their respective roles of ‘LB’ and Lamb are Lucy Sullivan, Sydney Stevenson, Charles Armstrong, David Benson and John Glover, playing acquaitances, associates and superiors of the civil sevants. As is often the case in these sitcoms, the person with the most clued-up is the person who is lowest ranking in the hierarchy – in this case LB and Lamb’s secretary Mildred Murfin played by Stevenson.

Evocative of the stature and poise of Morcambe and Wise, Critchlow and Sebastien are well-meaning and amiable, yet prone to compounding misunderstanding upon misunderstanding. In truth they are the emodiment of ‘The Peter Principle’ – a concept in management theory that states that workers are promoted to their level of incompetence.

Sir Gregory Pitkin, who ‘Whitehall’s finest’ are answerable to, is played by Glover, striking the right tone of self-interest and exasperation with the underlings who are tarnishing his reputation with the Prime Minister and the wider international community.

In contrast to ‘Noddy’ and Big Ears (as Mildred refers to her witless ‘superiors’), Benson plays a number of authotity figures, from high-ranking NASA official to Sixities PM Harold Wilson. Like Pitkin they also directly or indirectly are affected by the civil servants# decisions. Watching Men From The Ministry, it’s very apparent how much it influenced British comedy in the subsequent 40-50 years. Yes, Minister immediately come to mind, as do the satirical sketches of Bremner, Bird & Fortune and the less-caustic aspects of The Thick of It.

While details such as pre-decimal currency and cultural references place the show in a certain time-frame (which I found refreshing) there is much that is timeless and appealing. Half of the fun watching these classic episodes performed live is the potential for ‘cock-ups’. Some are ‘written’ into the scripts, but others can occur on the night, especially when tongue-twisting wordplay – a more commonplace feature in comedy of yesteryear – makes an appearance.

In closing, on alternate nights, the second half of the evening hosts one of two Ministry plays – A Terrible Weapon and The Man Who Made It Rain. A Terrible Weapon played at night attended and I have to say, this absurdist comedy of errors was even more fun than the first half, as almost the whole ensemble got to play multiple roles and show a greater range of their talents.