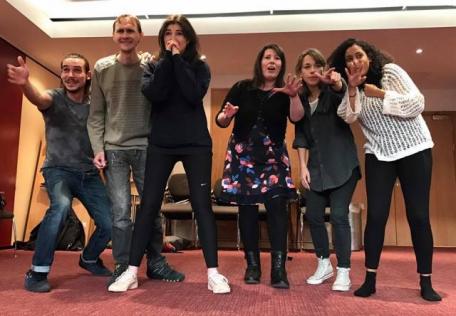 A parliament of owls, a kindle of kittens, a bevy of ladies, a worship of writers. The collective names for animals and types of people are fascinating and often very funny. Using this as an inspirational jumping off point, the Pensive Federation’s Collective Project offers a diverse selection of humorous and thought-provoking short plays that comment – directly or indirectly – on the nature of groups. Conversely, the place and status of the individual in relation to the collective are also scrutinised. As with all Pen Fed new writing events, the evening’s comprised of eight 12 minute plays written over 12 days. Twelve plays with 12 actors, eight directors and eight writers. And all directed by Pen Fed co-founder and artistic director Neil J Byden, with Sophie Flack.

The first half of the evening begins with Destruction by Julie Burrow. Set in a Truman Show-esque department that regularly intervenes in the life of one IT worker, Gaby the team leader is having second thoughts about the nature of their work and whether their charge really should be allowed to act upon his impulses. Things may work out for him with a bit of ‘chaos’ thrown into the mix…

Almost absurdist in nature, Glorifying by Isabel Dixon is very much influenced by Eugène Ionesco. Set in a world where having ‘dinner parties’ are the activity of choice for the masses on Friday night, not everyone is privileged enough to be invited to one or partake of wine. The arrival of a vistor proves to be a catalyst for contention and makes the group reasses what they are doing… Without giving anything away, it becomes apparent what the ‘parties’ allude to and their relation to current events. Probably my favourite play of the evening.

Group dynamics are further explored in Legion by Jonathan Edgington. Thrown off a train for rowdy behaviour, a circle of friends are joined by a knowledgable woman. A ‘recruiter’ of sorts, she asks them a number of questions and assesses their interest and independent thinking in their responses. One person seems partcularly intrigued, but his girlfriend is less keen on his interest in this ‘other woman’…

The capacity for groups of people to live for long durations in confined quarters has long been speculated. Lying by Kate Webster explores this undertaking, with this brief encounter about a manned mission to Mars. But when one person hints at the Capricorn One-esque nature of their mission, things begin to fall apart…

A little closer to home, Huddle by Andy Curtis will have anyone who lives in London laughing in recognition at the play’s conceit. Stuck on a tube train with everybody invading each other’s body space, partners and sisters find themselves not talking to each other, while one nauseous person has EVERYONE worried…

To keep a few surprises I won’t say any more about the remaining three plays. However, I will say that in keeping with the Pen Fed’s spirit of shaking things up and evolving, that it was good to see Jayne Edwards taking part in a slightly different capacity – from actor to playwright.

The Collective Project 2016 runs at Tristan Bates Theatre until 17th December 2016 with a matinee also playing at 2.30pm.
https://www.tristanbatestheatre.co.uk/whats-on/the-collective-project

Other plays in The Collective Project:
Worm by Conor Carrol
Aroma by Rob Greens
Scoop by Jane Edwards