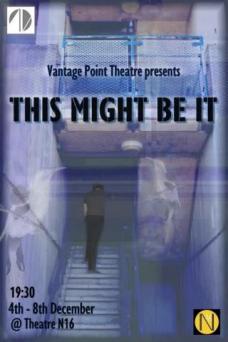 ‘No one should have no one at Christmas’. This statement is on the latest posters for charity Aged at the moment. The population of the world is the largest it has ever been in history (7.4 billion people) and telecommunications has made it easier than ever before for people across continents to keep in contact. Yet people more alone than ever. Why is this? Devised by theatre company Vantage Point This Might Be It addresses 21st century loneliness and isolation.

From the off, the paradoxical nature of today’s world is shown, with people commuting to work, not talking to each other – especially when they’re engrossed with their phones. As they make their separate ways, we see what their lives are like at work and home, and the personal circumstances that make them disconnected in some form or other.

Julie (Sundi Scott) gives lectures on social intercourse, making a living from her steps to communicating effectively. Her information and advice is sound, but it isn’t a universally applicable as she is unable to ‘reach’ her own her husband Owen who is suffering from depression.

Meanwhile Aidan, who has a hard time talking confidently with people, perseveres with conversing with a ‘female’ android. Naming her Kaua’i – after an extinct species of bird that used to reside on one of the Hawaiian islands – Aidan and his ‘artificial’ companion effectively learn from each other about clear expressing themselves and the nuances of non-verbal communication…

While these ‘couples’ remain at the core of the show, other aspects of feeling disconnected to the wider world are also explored. A Polish cleaner feels isolated while all manner of people are urgent requests for him to clear up areas. On a lighter note, there’s a young man who is infatuated with a woman who works on a doughnuts counter, but never gets around to asking her out.

While the idea for Emma Lundegaard’s Kaua’i on the surface sounds like something inspired from ITV’s Humans, the ‘character’ deftly demonstrates the minefield that even the most innocuous conversation covers and the disconnect that arises from ‘not being on the same wavelength’. Sensitivity to the other’s situation is key.

As for Julie, a burgeoning relationship with someone she met at a conference challenges her once steadfast beliefs. The decision to eventually break it off leads to further self-discoveries about what she is bringing to the table in relationships, and how that relates the dynamic between herself and Owen.

The subject of loneliness and alienation is as broad as it is deep, and as such much more could be said on the matter in this and other productions. However, within the focus of its parameters, Vantage Point’s This Might Be It has much to commend – a starting point for frank dialogue.